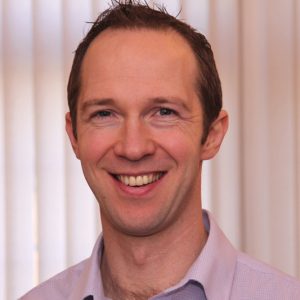 I played rugby quite seriously, and began struggling with a number of injuries. A personal recommendation from a friend led me to see a Chiropractor in Oxfordshire and with the successful resolution of these injuries a new interest was born. This interest developed further and I began the necessary studies in order to become a chiropractor. My focus at school and University had been human biology and advanced physiology for performance, and my choice to return to college felt like the culmination in my original education.

After graduating, I spent 2 years working at a clinic in Milton Keynes, until the position at the Mansfield Clinic became available. This has enabled me to gain valuable clinical experience in a great environment. In addition to conventional chiropractic care I have developed a special interest in sports injuries, particularly swimming, cycling and running and have had the opportunity to work closely with athletes at a high level in these fields. I also keep up-to-date with recent developments in sports physiology, especially coaching, diet and nutrition.

I stopped playing rugby in my late twenties, and changed my focus to endurance sports and the triathlon scene. This has evolved to an individual focus in cycling. I love to travel and have combined these interests with some European cycling events over the last few years. It also gives me a good excuse for reunions with friends who are scattered across Europe, see different countries and experience new cultures.

I am registered with the General Chiropractic Council and a member of the British Chiropractic Association and  The Royal College of Chiropractors.